For one, unlike many of my friends, my experiences with organized religion have been largely benign to good. I’m lucky to associate church with well-meaning do-gooders who enjoy eating big simple meals together (like pancakes and spaghetti).

I thought you were a doula….?

I’ve been a doula for 12 years (and a Lamaze educator for almost as long) and am still passionate about the work and pretty angry about how poorly the US treats our mothers and families in general.

But I worked in marketing for 15 years before that. Now that I’ve lived with the trade-offs of working with one’s passion (in this case, intense physical and emotional labor and sleepless nights) I feel ready to return to a relatively cushy office job. But former doula clients should definitely contact me if they’re having a new baby!

I thought you were starting a new business?

Since I’m lucky enough to have decent healthcare insurance through my husband’s employer, I can easily participate in the gig economy which suits me fine. This position is part-time and once I get in the swing I’m going to see how it makes sense to use the “extra” time in my week.

But mostly! St. Mark’s is a cool place. I really like that there is a Spanish-only service every Sunday (and that I need to brush up on my Spanish in order to do a good job).

Episcopalians tend to be bookish, intelligent, and committed to progressive ideals and social justice. And St. Mark’s was named one of 100 “most awesome” churches in the US last year according to blogger Guthrie Graves-Fitzsimmons. The criteria included a spiritually enriching community with vibrant worship and a focus on social justice, and is fully LGBTQ-inclusive.

And, it’s ten minutes away and everyone is super nice.

And, given the current climate in the US it feels right to be working for the good guys.

And, I have a lovely (shared) office with two windows 🙂

My love affair with church has waxed and waned my whole life. Our most recent church home, Trinity Cathedral, had a lot going for it — gorgeous music, a strong interest in social justice work, stuff for children, a knitting ministry, political values that align with our own, and Dean Tracey Lind, whom I adore. As do a lot of other people — her intelligence and charisma have won fans across the country and around the world, and everywhere I go I meet someone who knows her.

And did I mentioned gender-neutral language? It wasn’t until I had it that I realized how much I loved it and how necessary it is. I would insist on it, if I had a choice. It’s not all “he, his, him.” Instead of “Father, Son, and Holy Spirit,” we might hear about  “Creator, Redeemer, Sustainer of Life.” It’s much nicer that way, don’t you agree?

The biggest problem with Trinity was that it was 30 minutes away and the service started at 9:00 am.

So, now we’re in Lombard and I am ready for a fresh start. A neighborhood church would be great! A church where we can make friends and do church stuff. A church that doesn’t make me grit my teeth … or just turn off the alarm and roll over for a delicious Sunday morning lie-in.

I’ve been to three. Week One was Calvary Episcopal Church — my first choice as I have grown to love the liturgy and the Episcopal Church itself. It is a wee little space — in the picture I am sitting just a row or two from the back.

People were nice without being crazily welcoming (something that tends to scare Michael off) and the lady priest was earnest and friendly. The choir was amazingly good, especially for such a small congregation, and I was charmed when during the Passing of the Peace the choir shouted down from their loft, “Peace down there!” while the priest shouted back, “Peace up there!”

The next week I visited First United Methodist Lombard. The Methodist Church is the church of my youth and the church where Michael and I were married. There is a lot I like about it, especially the hymns, but when we moved to Ohio I was disenchanted with how conservative the Methodist churches tended to be … and as time went on I became more impatient with churches that opposed gay marriage. Nevertheless, I thought I’d give it another try. 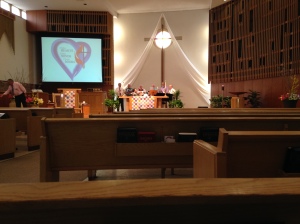 The late morning service we went to  (for this time young D accompanied me) was sparsely attended, and the minister and some other folks hastened to assure us that most of the church had come to the earlier service that took place out on the patio. The pastor, Luis Reyes, was born and raised in Puerto Rico and still speaks with an accent, and it seemed unusual to see him leading what seems otherwise to be a pretty typically whitebread Midwestern congregation. He scored extra points to me by roaming around and speaking extemporaneously during his sermon (and if he did wear a mic, it wasn’t distracting!). We liked it.

D would have been happy to go back there again this week but I want to see what else our new town has to offer, so today we made our way to Holy Trinity Lutheran Church. Sadly, this was where the lack of mic-savvy put me over the edge. At Trinity, which is a pretty huge space, there was a person in charge of A/V and still there were problems with the mics from time to time. Now, put less expensive technology into constant use with no one in charge — combined with a minister who sings part of the service and wears a mic the whole time — well, it is unfortunate.

People were not especially friendly. Early in the service he asked everyone to look around and if they saw someone they didn’t recognize, to introduce themselves and say hello. D and I laughed later that the woman in front of us just basically gave us the side-eye over her shoulder.

It being Pentecost (one of my favorite church days), the minister gave a sermon in the first person, as if he was one of the people there, which interested me — but there was a baby who babbled (not crying, just making noise) through the whole thing. I would be a churlish mother indeed if I faulted the parent or the baby, which I don’t. But I do wish they had left earlier than they did.  And before they left, I felt like I could see every thought bubble over every other head in the place, thinking irritably, “get that kid out of here!”

It was a church fail.

As a former marketing type, it interests me to see how churches welcome, or fail to welcome, visitors to their midst. What are the first impressions? What is the follow up? And it interests me so much that I wonder if I ought to try visiting some churches that are out of my comfort zone — the ones that don’t allow women to be ministers, the ones whose predominant political views are polar opposites of my own, the ones who insist that the Bible is the final inerrant word of God? The big churches, the well-attended churches, the churches with really active ministries do tend to be these types of churches.

What matters, really? Certainly making a decision about attending church based on its inoffensive use of A/V equipment doesn’t seem to make me a good Christian. Whatever that means.

Lots of big questions raised here for me. No answers yet. I do believe we will find a church where we feel welcome, where we feel the warmth, where we can make a home and feel community. I don’t know what it looks like yet. I don’t know how long I’m going to look. But I do know that church fills my little buddy D with love — he has always really liked church, since he was a little baby snatching the Communion host out of the priest’s hands.

The best part so far is the traditional post-church Sunday breakfast.